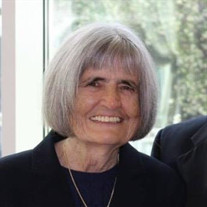 Betty W. Kelly, loving wife, mother, grandmother, great grandmother and pioneering woman CPA died December 1, 2017 after a long hard fight with an illness. She is survived by her friend since she was 6 years old and husband of 62 years, Bill Sr., her sons Bill Jr (Jennifer), Scott (Jolie) and Andy (Missy), 13 grandchildren and 13 great grandchildren. Betty was 85, born November 20, 1932 in Jacksonville, Florida to Jack Weyer Sr. and Frances Weyer. Betty moved to DeLand in 1958 where she and her husband raised their family. Betty obtained a bachelors degree in accounting and MBA from Stetson University in 1968. She operated an accounting firm in DeLand which later became the firm of Betty W. Kelly CPA PA from 1966 until her death. Betty was an inspiration to her family and source of practical wisdom to her clients, many of whom became close friends. She was active in organizations that benefited children and families including Cub Scouts, DHS Band Parents Association and the West Volusia YMCA, among others, all of which she served in leadership rolls. She served as Treasurer of First Baptist Church in DeLand for many years where she led the effort to build two major additions to its facilities. Although she almost always became the leader of organizations in which she was involved she never liked to be the center of attention. She was the recipient of a lifetime achievement award from the Chamber of Commerce. She was predeceased by four brothers - Jack Jr., Terry, Bob and Bill and sister – Shirley Weyer Draper. Her surviving sister, Nancy Weyer Walker lives in Jacksonville, Florida. Flowers are welcome and donations may be made to The MDS Foundation 4573 South Broad St., Suite 150 Yardville, NJ 08620. Viewing will be Friday December 8th from 5PM to 7PM in the Powell Chapel at First Baptist Church DeLand. The funeral service will be held Saturday 10:30AM in the sanctuary at First Baptist Church followed by graveside services at Oakdale Cemetery. All are invited to lunch after the services in the family life center at First Baptist Church. Online condolences may be made at www.allensummerhill.com . Allen-Summerhill DeLand is in charge.

Betty W. Kelly, loving wife, mother, grandmother, great grandmother and pioneering woman CPA died December 1, 2017 after a long hard fight with an illness. She is survived by her friend since she was 6 years old and husband of 62 years, Bill... View Obituary & Service Information

The family of Betty Weyer Kelly created this Life Tributes page to make it easy to share your memories.

Send flowers to the Kelly family.