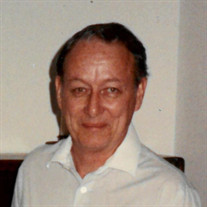 Donald Ray Dugger, 88, of DeLand passed away July 12, 2020 at his home surrounded by his three, loving children. Known to everyone as Don, he was born in East Alton, Illinois on January 16, 1932 and lived there until his father, Odell, moved the family to DeLand in 1945. Following his graduation from DeLand High School in June,1950, Don went on to Georgia Institute of Technology (Georgia Tech) in Atlanta, GA, to study engineering. He received a bachelor’s degree in Civil Engineering, June 13, 1955 and was commissioned as a Second Lieutenant in the United States Air Force. While at Tech, he met Jane Ragon, who he married on June 11, 1955. Shortly thereafter, the young couple moved to Tyndall Air Force Base, Florida where he reported for duty as an installations engineer. He was honorably discharged in June of 1957 and continued to serve in the United States Air Force Reserves until 1977 having achieved the rank of Major. In 1957, he moved back to DeLand to work alongside his father, a general contractor, who owned and operated a busy and thriving residential and commercial construction company. He later took over the company in the mid-1970’s forming Dugger Construction and Engineering. Don can be described as a quiet, intelligent, and patient man who loved the art of engineering and building. Engineering was his hobby, as well as his profession. People who met or worked with him were impressed by his knowledge of engineering and construction and his dedication to solving any problem that was put in front of him. His dry wit and sense of humor endeared him to many. With his father, and later when he took over the business, Don built many custom homes and commercial buildings in and around DeLand. The county Agriculture Center, the original DeLand Library, the original Volusia County Council meeting chambers, the DeLand police department, the Medical Arts building, and the building that houses the current Ace Hardware are just a sample of the commercial space he built or helped to build. He was a “hands-on” builder who often lifted his hammer and worked side-by-side with his crew. He taught himself how to use a lathe and router because he liked learning to use new tools. He put that skill to use constructing signs and helping a priest at St. Peter’s Church to make wooden chalices. His greatest achievement was an all wooden sign he constructed, in his spare time, for the Deland City Hall in the late 1970’s. It stood out front on the corner of New York and Florida avenues. By the late 1980’s, he was practicing civil engineering full-time. No computer aided design for him; all of his plans were drawn by hand on a drafting board. However, he did give up using a slide rule for his engineering calculations and was an early adopter of the Hewlett-Packard hand-held scientific calculator. He had become a certified professional engineer (PE) in 1964 and practiced as an engineer until early 2019, when he decided it was time to retire. He was truly a Ramblin Wreck from Georgia Tech and a “heck” of an engineer! Don was a loving husband and father. He enjoyed participating in the daily activities of his wife and children. He was the kind of dad who willingly changed diapers, made breakfast, helped at bath time, and helped with homework. He was the “go to person” when you were having trouble with a math problem. He loved getting involved and assisting with his wife’s hobbies and interests, especially when it involved St. Peter’s Church. He was proud of his children and their accomplishments, always encouraging them to reach their potential. He spent countless hours helping them with their science projects and homework, playing games, driving them to school activities, teaching them to drive, patiently stringing lights on the Christmas tree, and taking his children to the “job site” to help “daddy build something”. Valentine’s was Dad’s holiday. Boxes of heart-shaped chocolates were placed on the kitchen table to surprise his wife and kids when they got up on Valentine’s morning. His Sunday pancakes were something no one wanted to miss. Monday nights were a favorite too, when he would return home from his weekly Air Force Reserves meeting with a box of fresh, hot Krispy Kreme doughnuts. But, in his later years, it was making fudge that became his “signature dish”. Once, you tasted it, you always came back for more. He was preceded in death by his wife Jane. He is survived by his son Donald Ray Dugger, Jr. of Gainesville; daughters Angel Elaine Schumaker of Bunnell; and Donna Jane de Peyster of DeLand; brother Russel O. Dugger of DeLand (born with the same birthdate, Don often said his brother was his ninth birthday present); grandchildren Robin Kelly Spencer and Michael Ryan Schumaker and great-grandchildren Denisse Kristen Schumaker, Matthew Scott Schumaker, Madison Leigh Schumaker and Demi Rose Schumaker; and his two cats, Bitzi and Mitzi. A funeral service will be held on Saturday, July 18 at 11AM at Allen-Summerhill Memorial Chapel (which Don built) in DeLand, with a visitation from 10 to 11AM prior to the service. Burial will follow at Oakdale Cemetery in DeLand. Online condolences may be made at www.allensummerhillfuneralhome.com. Allen-Summerhill DeLand is in charge.

Donald Ray Dugger, 88, of DeLand passed away July 12, 2020 at his home surrounded by his three, loving children. Known to everyone as Don, he was born in East Alton, Illinois on January 16, 1932 and lived there until his father, Odell, moved... View Obituary & Service Information

The family of Donald Ray Dugger created this Life Tributes page to make it easy to share your memories.

Send flowers to the Dugger family.