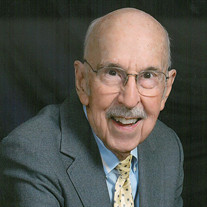 DONALD CORBIN JOHNSTON Feb. 19, 1926 - April 13, 2019 Donald (Don) Corbin Johnston, a native of DeLand and a descendent of early settlers of this area, died Saturday, April 13, 2019 at Advent Health Hospital DeLand. Don was born in the Memorial Hospital on Stone Street to Sydney Paul Johnston and Constance Corbin Johnston and lived all of his life in this charming central Florida city. His younger brother, Sydney Dick Johnston, predeceased him. Don attended local schools and graduated from DeLand High School in 1944. He was a lifelong member of St. Barnabas Episcopal Church where he was confirmed on May 16, 1941. After high school Don enlisted in the Army Air Corps and was in a cadet training program until the end of World War II cancelled the program. He took courses for two years, both at the University of Florida and Stetson University before completing a program designed to help him take over the family printing business, E. O. Painter Printing. Organized in 1886, this firm represents one of Florida's oldest continuously- operating businesses. Don, later joined by his brother Dick, operated as the fourth generation in the business, known primarily for its printing of books and periodicals. After a blind date meeting, Don married Mary Chandler of Daytona Beach on November 26, 1949, and they shared 65 years of marriage until Mary's passing in 2015. To this union were born three daughters, Elizabeth Conrad, Donna Corbin, and Dorothy (Dolly) Taylor. Don's interests and activities were numerous and varied. He was an avid tennis player, a collector and restorer of older cars, and a collector of guns, coins and assorted antiques. He had a fondness for big band music from the 1940s and jazz music of any kind. Most of all he treasured his friends, young and old, and people who came into his life. His focus of life was his love and concern for his three daughters, his late wife, Mary, and his present wife, Hilda, all of whom he loved with a gentle and caring heart. His family had a special connection to the North Carolina mountains. As a young man he shared in the enjoyment of a family summer cabin in Black Mountain; in later years, he and Mary found pleasure in retreating to their second home in Boone. Don found great fun in dressing as a true gentleman, hoping to encourage the younger generations to follow suit. In 2016, he was married to Hilda McCarter, a friend whom he met at a Thursday service at St. Barnabas. Their three year and three months union brought joy to both of them. Together they chose to "age in place", making new memories, and finding pleasure in adding color and interest to their home and yard. Don is survived by his wife, Hilda, daughters, Conrad Johnson (Jim Bissonette), Donna Johnston and Dolly (Neal) Norton, Hilda's two sons, Steve McCarter (Connie) and Jamie McCarter; and grandchildren, Taylor Norton, Lindsey Norton, Courtney Wilson, Ryan Weaver, Hayley Franco, Logan Weaver, Kristen Jackson, Kyle Johnson, Brittany Colding , Timothy McCarter, and Stormie McCarter. Also surviving are nephews, Sidney Johnston, Jeff Johnston, Corby Johnston and Mark Johnston At present there are seven great-grandchildren. A Celebration of Life for Don will be held on Monday, April 22, 2019, at 11:00 at St. Barnabas Church, DeLand. Committal will immediately follow in the St. Barnabas Memorial Garden, followed by a reception at the church. Memorial gifts may be made to the Donald Johnston Memorial Fund of St. Barnabas Church, 319 W. Wisconsin Avenue, DeLand.

The family of Donald Corbin Johnston created this Life Tributes page to make it easy to share your memories.

Send flowers to the Johnston family.