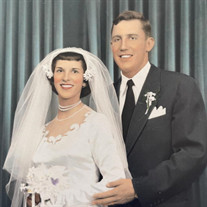 Isabelle (Lisa) Pluta Kirchof (1930-2017) Isabelle (Lisa) Pluta Kirchof, age 87, left her family to join her Lord and Savior on the 26th of May 2017. Lisa was born in Gilbertville, MA on February 8, 1930, to Albert and Katherine Pluta, who had immigrated to the United States from Poland prior to WWI. Growing up in rural western Massachusetts, her parents and six brothers created a rich childhood focused on the family, the outdoor, in what is known today as the Quabbin Reservoir, the Eagles Polish Hall, and the family band which her father created to entertain at special events in the region. Each of her siblings played a different instrument. Lisa, the sixth of seven children, played the drums. After graduating from Hardwick High School, Lisa briefly attended Smith College before enlisting in the U.S. Army during the Korean War. While stationed at Ft. Benning, GA, she met the love of her life and husband of 68 years, Vernon Lee Kirchof, a second- generation Volusia County native. After their discharge and wedding, Lisa and Vern settled in Jacksonville, FL, and shortly thereafter moved to Orlando, where they lived on Lake Conway in a new neighborhood full of Air Force officers. Lisa quickly fell in love with the Florida sunshine, sand in her shoes, and became a devoted Floridian. As part of the culture of Conway, Lisa learned to host the "revolving afternoon cocktail party" on Conway complete with their own flag, which flew under the American flag. Most every home in the neighborhood had a flagpole in their yard. The flag signaled the neighbors that the house was open for guests. Lisa was a devoted mother of four boys, Michael Steven (Maggie) of Orlando, FL; Randolph Otto, III (Karen) of Hillsborough, NC; Kurt Matthew (Nancy) of Houston, TX; and Peter Donald (Pam) of Dallas, TX. During her husband's career, in which she was a partner in his success, Lisa made herself part of the fabric of each community during relocations to Richardson, TX, Palos Verdes, CA, Lancaster, OH, Wilton, CT and Muncie, IN. While in California, Lisa successfully started two private schools. Her focus on education developed from raising her sons. Lisa advanced an innovative early childhood learning technique through music and rhythm protocols. Lisa and Vern retired on the beach in Ormond Beach, as it was her lifelong desire to live on a Florida beach and she spent many hours gazing at the ocean. She happily enjoyed her life in Ormond serving the community and loving her four daughters-in-law (Maggie, Karen, Nancy, and Pam). Although she always wanted a daughter of her own, Lisa often said that God blessed her with four wonderful daughters whom she deeply loved. During her time in Ormond Beach, Lisa devoted her gifts of time and talent to The Casements Museum (Ormond home to JD Rockefeller) and the Museum of Arts and Science in Daytona Beach. She was an active fundraiser, volunteer, and docent. But more than anything in her life, Lisa was dedicated to her grandchildren, Brady, Emily, Madeline, Colin, Kate, Grace, and Otto. Lisa and Vern often travelled to be with their grandchildren, and each is blessed to have experienced her love and commitment to God, her husband, her children, and her friends whose lives she enriched over her 87 years. In addition to her parents, Albert and Katherine Klimaj Pluta, and her in-laws Edna Flowers Kirchof and Randolph Otto Kirchof II, Lisa was preceded in death by brothers Michael, Joseph, Matthew, Eddie, and Walter. Her brother Chet lives in Warren, MA. After a memorial service to be scheduled, Lisa will be interred in the family cemetery in DeLeon Springs, FL.

The family of Isabelle (Lisa) Pluta Kirchof created this Life Tributes page to make it easy to share your memories.

Send flowers to the Kirchof family.