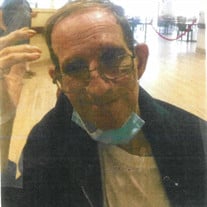 James Clark Pennebaker James Clark Pennebaker, 83, of DeLeon Springs, passed away April 3, 2021, after a long illness. Jim was born in Trafford, PA, to James M. and Alma “Sudie” Pennebaker. After graduating from high school in Pitcairn, PA, he joined the Navy and retired as a Chief Petty Officer after 20 years, including a year at Phu Bai Combat Base during the Viet Nam War. During his years in the Navy, he and his family lived in Morocco, Philippines, Japan, Ft. Meade, Maryland, and Homestead, Florida. After moving to Florida for the third time, Jim later retired from the United States Postal Service as a letter carrier in DeLand. Jim was a Past Master of his Masonic lodge, Valley Lodge #613 in Turtle Creek, PA, and a member of the VFW, American Legion and U. S. Naval Cryptologic Veterans Association. He was an avid Pittsburgh Steelers and Penguins fan and was proud of bowling a 300 game when he was well into his sixties. He is survived by his wife of 61 years, Lillian “Janie,” their three children, James, John (Laurie), and Jodi (Paul Demasky, Jr.); seven grandchildren; and three great grandchildren. He is also survived by his brother Ray (Laura Bounds), niece Sudie, Aunt Emma Lou Morocco, and many cousins. A memorial service for the family has been held. At a later date a service will be held at a nearby veterans’ cemetery.

The family of James Clark Pennebaker created this Life Tributes page to make it easy to share your memories.

Send flowers to the Pennebaker family.