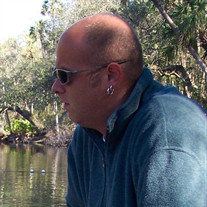 Jason Brooks Nelson, 46, passed away peacefully in his sleep from natural causes during the early morning hours of June 4, 2018, at his home in Ormond Beach, Florida. Jason shared his home, love and life with his partner Ryan Moore, who moved... View Obituary & Service Information

The family of Jason Brooks Nelson created this Life Tributes page to make it easy to share your memories.

Jason Brooks Nelson, 46, passed away peacefully in his sleep...

Send flowers to the Nelson family.