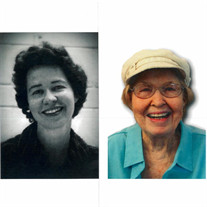 Jessie Parrish Morland, 96, of DeLand, entered into eternal life on July 7, 2021 at the Halifax HealthHospice of Orange City, after suffering a cerebral hemorrhage 10 days previously. Jessie was a member of the founding family of Parrish (Manatee County). The youngest of four children, she grew up in the midst of orange groves until the age of nine, when her widowed mother moved the family to Bradenton. Unable to afford college when WWII broke out, at the age of 17 she became the manager of the Western Union office of Palmetto, Florida. There she was ‘discovered’ by Dr. Ludd M. Spivey, President of Florida Southern College in Lakeland. After observing Jessie at her work, he offered her a job as a secretary at the college in exchange for tuition. She enrolled the following year, and in her sophomore year was made editor of the college newspaper, the Oracle, a position she held until graduating in 1947. After a brief year in New York City, Jessie returned to Florida Southern as the Assistant Director of Public Relations, where she met the basketball coach, Richard (‘Dick’) Morland. They were married on St. Patrick’s Day in 1949, and soon moved to New York City, where she edited Dun’s Bulletin, an in-house publication for the employees of Dun and Bradstreet, Inc. She moved to DeLand in 1952 (when her husband became the coach of the Stetson Hi-Hatters), and started writing for the West Volusia section of the Daytona News-Journal and later for the DeLand Sun News, then edited by Dick Westervelt. She immediately became active in the University Women’s Club, to which she devoted much time and energy for decades. Jessie served as an informal mentor for new Stetson faculty wives and made lifelong friends of many of them. In the early 1960s, she was recruited to join the DeLand branch of the National League of American Pen Women, where she served as President from 1968-1970 and as chair of Membership for decades, culling artists, writers, and musicians to join the group which flourished under her leadership. Jessie was also active in West Volusia Artists and took great interest in the theatre arts. From 1967 to 1987, Jessie taught English and journalism at DeLand Junior High School, a job she loved above all others. There she founded the student newspaper, also called the Oracle, which started the careers of several journalists and continued long after she retired from teaching. Jessie was also an accomplished painter, counting Frieda Stern, Louis Freund, Fred Messersmith, and Virginia Singer among her mentors. Her acrylic paintings were exhibited in several juried shows in Volusia County. She was a member of the board of directors of the DeLand Museum of Art and the DeLand Cultural Committee (president in 1990), and has been listed in Who’s Who in the South and Southwest and Who’s Who of American Women. She was preceded in death by her husband, Richard, and her siblings, Thelma Rochon (Ned), Laurene Powell (Archie), and Ralph Parrish (Marlyn). She is survived by her daughter, Laura Morland Rhodes (John) of Berkeley, Calif. and Paris, France; two nephews: Dr. Ralph Powell, Esq. of Langhorne, Penn; and David Parrish (Melissa) of Terra Ceia, Florida; ten treasured Morland nieces and nephews; and her friend and companion for the past fifteen years, Rebekah McDonald Bostic. Her ashes will be interred in her family plot in Parrish, Florida. A service and celebration of Jessie’s memory will take place in the Cloisters’ Clubhouse in the late afternoon and evening of Saturday, October 16th, 2021. In lieu of flowers, donations are requested to the Museum of Art−DeLand or the Sands Theater Center of DeLand.

Jessie Parrish Morland, 96, of DeLand, entered into eternal life on July 7, 2021 at the Halifax HealthHospice of Orange City, after suffering a cerebral hemorrhage 10 days previously. Jessie was a member of the founding family of Parrish (Manatee... View Obituary & Service Information

The family of Jessie Parrish Morland created this Life Tributes page to make it easy to share your memories.

Send flowers to the Morland family.