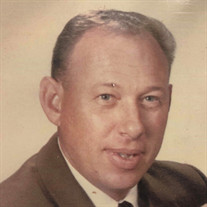 It’s with heavy hearts that my sister, brother and I share the sad news of the passing of our dad, Lyle F. “Scotty” Ferguson, Jr. He passed peacefully in his sleep on December 15, 2018. Lyle was born on November 24th, 1935 in Three Rivers, MI to Lyle Franklin and Marguerite Bloom Ferguson. He joined the United States Air Force in 1953, where he served his country to 20 years, retiring in 1973. He met his bride-to-be, Phoebe Jane Doody, in 1954, in Presque Isle, Maine where they were later married on February 2, 1956. They raised three children, Tammy, David and Randi. He is preceded in death by his parents, his wife, and a daughter, Lawanda, who died in childbirth, as well as a great-granddaughter, Gabriella. Lyle is survived by his brother Lynn Ferguson of Ormond Beach, Florida, his children Tammy Carver of Royal Palm Beach, Florida, David Ferguson of Ormond Beach, Florida and Randi Ives of Republic, Missouri, as well as 7 grandchildren and 6 great-grandchildren. Dad always had a story to tell, never met a stranger, and was always willing to help where he could. He will be missed very much. He will receive military honors and be interred at the Veterans Cemetery in Springfield, Missouri.

The family of Lyle F. "Scotty" Ferguson created this Life Tributes page to make it easy to share your memories.

It’s with heavy hearts that my sister, brother and I share the...

Send flowers to the Ferguson family.