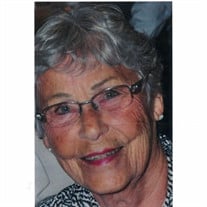 Marjorie J. Wicker, 90, of Orange City, passed away peacefully on October 26 at Halifax Hospital Hospice Center, surrounded by loving family. Daughter of Loretta and Henry Young, Marge was born on March 3, 1931, in Utica, New York. She graduated from Port Byron High School and married Herschel “Jay” Wicker on July 9, 1949. Together they had five children and enjoyed life in several states before Jay retired from the US Air Force and they settled in Rome, New York. Jay predeceased Marge in February of 1972. After Jay passed, Marge volunteered as a teacher’s aide at schools in Rome. She then attended Teacher’s Assistant training and worked with children with special needs in the Homer, New York, school system. She especially loved helping kids read and write, take pride in themselves, and achieve their full potential for a meaningful life. She worked in Rome and Homer area schools for more than 20 years, retiring at age 68. Marge was fortunate to meet a loving partner in Michael Sala, with whom she spent her last 46 years. She is survived by Mike; her children William, Kathleen (Sixtus), Richard (Gina), and Donald; daughter-in-law Debbie; sisters Shirley Bryant, Nancy McGinn, and Jesse Powers Latimer; brother Bill; 12 grandchildren; 15 great grandchildren; and numerous nieces and nephews. In addition to her parents and husband Jay, Marge was predeceased by her oldest son Gerald Wicker (widow Debbie); sisters Rena Carbonaro, Loretta “Honey” Anschuetz, and Reta Sroka; and brothers Henry “Brub” and Robert “Bob” Young. Marge would want everyone to know that her last chapter on earth was a joyous adventure. For almost eight weeks between Deland Hospital and then Halifax Hospital Hospice Center, she was surrounded by love. Her children, grandchildren and greatgrandchildren as well as Mike’s children, grandchildren, and great-grandchildren came from all over the country to grace her days with visits, phone calls, texts, letters, cards, a belated birthday party, and a whole lot of takeout food. She loved every moment of every gathering, presiding over the festivities and memorizing faces. She laughed and cried, told childhood stories, held court, and shared her decades of wisdom with the younger generations and hospital and hospice staff alike. Often as many as 15 squeezed in to visit and talk, far exceeding the maximum number of visitors allowed in her room, with nurses and techs often joining in. Marge was very grateful to be given so much time to see everyone, ease their minds, and help them adjust. It was especially important for her to help the youngest ones understand more and fear less about what was facing her in the days ahead. Marge lived life on her own terms, and that was how she moved on to what she called the next step of her journey. Marge will be cremated, with her ashes buried next to Jay at Rome Cemetery. The Wicker and Sala families plan a memorial gathering to take place in Orange City when schedules and travel permit. In lieu of flowers, they suggest memorial contributions to the Halifax Hospital Hospice Center. Marge can also be honored through acts of kindness toward people who need help.

The family of Marjorie J. Wicker created this Life Tributes page to make it easy to share your memories.

Send flowers to the Wicker family.