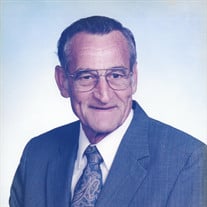 Peter Joseph Burbine, Jr. passed away October 14, 2017 at Alliance Center in DeLand, Florida at the age of 84. Peter was born in Reading, Massachusetts, served in the US Army during the Korean War, became a Master Plumber, and opened Pete’s Plumbing and Heating. In 1973, he and his family moved to DeLand where he became the first Code Enforcement Officer for the City of DeLand and later became the City Building Official retiring in 1992. He was blessed with seven children, thirteen grandchildren and seven great-grandchildren. Over the years, Peter was very involved with St. Peters Catholic Church as an usher and one of the initial Eucharistic Ministers. He was also an integral part of Habitat For Humanity, where he helped build 82 homes and a was lifelong member of the Knights of Columbus, where he served as Grand Knight from 1976-77. Peter is survived by his loving wife of 62 years Agnes, his children Michael (Betty) Burbine of Phoenix City, AL, Sandra (Marty) Thomas of DeLand, FL, Nancy (Joe, dec.) Crook of Las Vegas, NV, Linda (Doug) Shockley of DeLand, FL, David (Lynette) Burbine of Spring Hill, FL, Mark (Tracy) Burbine of Alpharetta, GA, and Ann (Bill) Freeland of DeLand, FL, his sister Florence Landry of Stuart, FL and his many nieces and nephews. He is preceded in death by his parents Peter and Rose Burbine; brothers Alfred Burbine, Thomas Burbine and Phillip (Chip) Burbine. The funeral mass will be held at St. Peters Catholic Church on Saturday October 21st at 10am. Reception to follow at St. Theresa Hall. The family will receive friends prior to the service. In lieu of flowers, the family suggest memorial contributions to Habitat For Humanity, St. Peters Food Bank or a charity of your choice.

Peter Joseph Burbine, Jr. passed away October 14, 2017 at Alliance Center in DeLand, Florida at the age of 84. Peter was born in Reading, Massachusetts, served in the US Army during the Korean War, became a Master Plumber, and opened Pete&#8217;s... View Obituary & Service Information

The family of Peter Joseph Burbine created this Life Tributes page to make it easy to share your memories.

Send flowers to the Burbine family.