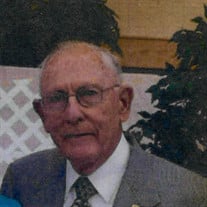 Thurman Elias Barrow, age 89 made the transition from this earthy house of clay/mud to his new home in Heaven, designed and built especially for him by Jesus Christ – the master carpenter/builder, on November 12, 2020. He was born February 18, 1931, to a young couple of tenant farmers/sharecroppers in Tatnall County, near the city of Glennville, Georgia. He graduated from Reidsville Georgia High School in 1949. In February 1951 he enlisted for a four year tour in the US Air Force and received his basic training at Lackland Air Force Base in San Antonio, Texas. Following basic training, he was sent to the 5th Army Area Food Service School near Indianapolis, Indiana for 8 weeks, In July 1951 he was stationed at Orlando Air Force Base, Orlando, Florida , and remained there until October 1953 when he, along with many other airmen were given the option of taking an early release from active duty. In the fall of 1954 he enrolled as a full time student at Stetson University in DeLand, Florida. With benefits from the federal government under the G.I Bill, together with some special needs grants and part-time job earnings, he was able to graduate with a Bachelors Degree/Accounting Major in May 1959. While a Stetson Student, he met a very attractive, talented young lady, Mollie Jane Parrish, a graduate of Mars Hill Junior College near Ashville, North Carolina. She had transferred to Stetson to continue her goal of earning a degree in music education. She and Thurman were married in September 1957. She graduated in 1958 and he in 1959. Following graduation from Stetson, Thurman worked for a certified accounting firm in Orlando, Florida for 2 years before accepting an offer for a position with the State of Florida – State Auditors Office – later renamed Office of the Auditor General. He retired from that office in February 1991 after 30 years service. He is survived by wife Mollie, son Mark Barrow (Juliana) and granddaughter Maria Furbee. A graveside service will be held on Thursday, November 19th at 11am at DeLand Memorial Gardens. Online condolences may be made at www.allensummerhill.com. Allen-Summerhill DeLand is in charge.

Thurman Elias Barrow, age 89 made the transition from this earthy house of clay/mud to his new home in Heaven, designed and built especially for him by Jesus Christ &#8211; the master carpenter/builder, on November 12, 2020. He was born February... View Obituary & Service Information

The family of Thurman Elias Barrrow created this Life Tributes page to make it easy to share your memories.

Thurman Elias Barrow, age 89 made the transition from this earthy...

Send flowers to the Barrrow family.