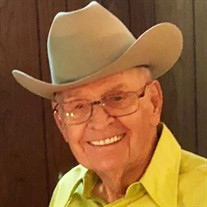 Walter White, Sr., 98, went to be with the Lord Wednesday, July 21, 2021. He was born September 13, 1922, in Blakely, Georgia to a farming family where he learned at an early age that hard work results in a self-supporting lifestyle, and he developed his love of gardening. When he was only 14 years old, he moved to DeLand, Florida, where he met Annie Pearl Pounds who became his wife of 65 years and the mother of his four children; Edna Pearl (W.A.) McGhee, Walter (Brenda) White, Linda Miller and Barbara (Howard). He has 4 grandchildren: Bill McGhee, Debbie (Bud) Martin, Kimberly (Larry) Lundy, Kristy (Josh) Forare; 9 great grandchildren: Junior (Jessica) Martin, Melissa Martin, Catelyn (Taylor) Hassell, Zachary and Grady Lundy, Emma, Aaron and Lila Forare, Nicholas Doyle; 2 great great grandchildren: Jordan and Everett Hassell. During World War II he served in the U.S. Navy from 1941-1945 and survived a direct Japanese enemy hit on board the USS Sangamon, an escort carrier. He was honorably discharged. In addition to working in businesses for himself, Walter was a well known salesman at Bill Holler Motor Sales in DeLand, who worked his way up to Sales Manager during his 13 year career there. Walter was an avid square dancer and a member of the Honey Bees Square Dancing Club for 50 years. He was predeceased by his wife, Annie Pearl; father, Raymond White; mother, Esther Farr Reynolds; sister, Eloise Trawick; half sister, Hazel Lovering and half brother, Billy Reynolds. Allen Summerhill is in charge of arrangements. A viewing will be Sunday, August 1 between 1:00-3:00 p.m., and a funeral service will be Monday, August 2 at 11:00 a.m. with both being held in the Chapel. Following the funeral, a military graveside service will be held at Oakdale Cemetery in DeLand.

Walter White, Sr., 98, went to be with the Lord Wednesday, July 21, 2021. He was born September 13, 1922, in Blakely, Georgia to a farming family where he learned at an early age that hard work results in a self-supporting lifestyle, and he... View Obituary & Service Information

The family of Walter White Sr. created this Life Tributes page to make it easy to share your memories.

Send flowers to the White family.