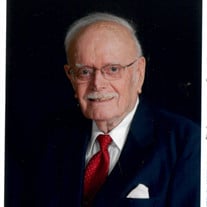 William Roberts Cogswell, 91, passed peacefully March 11, 2021. A memorial service will be at 10 a.m. Saturday, April 10, at St. Barnabas Episcopal Church in DeLand. William was born June 24, 1929, in Washington, D.C., the son of Roberts and Alice Cogswell. He graduated from DeLand High School in 1948. William served in the U.S. Army 1948-52 during the Korean War. He was very fond of his time in the Army, especially in Heidelberg, Germany. A highlight was coming home on leave on the Queen Mary - a thrill of a lifetime. He moved to Florida with his parents in 1937 from Kensington, Maryland, first to St. Petersburg and then DeLand. William worked for the Atlantic Coastline Railroad, 1953-55, as an assistant signalman, and for the U.S. Postal Service 1959-86, retiring after 35 years. He was a 50-year postal union member. William was a member of the DeLand Elks Lodge, serving as chaplain, St. Barnabas Episcopal Church, and the National Railroad History Society, and as a charter member working many hours at the Railroad Museum in Winter Garden. William loved the railroad from childhood. He was a historian, and loved collecting maps and reading. William was a devoted husband, leaving behind his wife of 67 years, Mary Frances; his son and daughter-in-law, Roberts and Debra Cogswell; daughter and son-in-law Elizabeth "Annabo" and Kevin Harkey; grandchildren Rachel Hocroft (Joseph), David Vanlandingham Jr., Lauren Cogswell and Christopher Cogswell; and great-grandchildren Wyatt Hocroft and Colton Vanlandingham. Memorial donations may be made to St. Barnabas Episcopal Church in DeLand. Allen-Summerhill is in charge.

The family of William Roberts Cogswell created this Life Tributes page to make it easy to share your memories.

Send flowers to the Cogswell family.