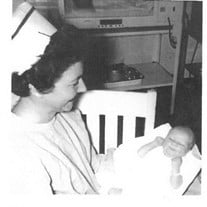 Winona Improta Went to be with her Lord and Savior on Saturday January 21, 2017. Winona was a woman of great personal conviction with a loving family. She married the man of her dreams, had a son that she loved dearly and took great pride in. We all enjoyed her stories of childhood pets and their antics. Winona’s Father was a forester, her childhood was spent in rural America of the 1930’s and 40’s. The three sisters had a dog, a raccoon and a deer that had lost its mother. The raccoon was the funniest and had to learn the hard way that if you wash a sugar cube it tends to disappear. He did finely learn to eat his sugar unwashed! She fed anyone that was hungry and often a stray or even the neighbor’s cats that would stop by for a pet and a snack. Her Christian beliefs are very strong, supporting ministries known for feeding and taking care of people. Her Memory will always live in our hearts until we meet again. Winona was born December 17, 1930 in Florida, the family later moved to Georgia for much of her early life after she graduated from Nahunta High School the family returned to Florida living in Deleon Springs. She attended nursing school and graduated as a Registered Nurse. She specialized in the care of premature babies working in a number of hospitals following her husband in his military service. They moved to Daytona Beach in 1974 and Winona was a R.N. in the neonatal unit of Halifax Hospital where she was well known for her skill in the care of critically ill babies. Only the Lord knows how many people are alive today due to the care they received in her hands as premature infants. After a professional career of over 40 years she retired, to a quiet life in Port Orange Florida. Winona Improta was pre deceased by her husband of 48 year in 2008 Leegrand Improta, her Mother Jimmie Mosley White, Father Earl Herman White, Sister Latrelle White Ritch and Brother in law: Billie Beach Sr. She is survived by Her Son Allen Lee Improta and Jackie (Nick & Samantha). Sister: Yvonne Beach of De Leon Springs. Nieces: Leila McGee (Monty), Ashley (Mike), Heather (Joey), Connie (George) and Chelsea. Nephews: Bill Beach Jr., Rusty Improta, Dudley Improta and Mary Jane (Anna & Clayton). Allen Summerhill 126 E. New York Av. Deland, Florida is in charge of the arrangements. Viewing hours 6 to 7:30 pm Thursday January 26th, 2017. Service will be in the Chapel at Allen Summerhill Deland 1 pm Friday January 27th, 2017 with reverend Tom White giving the eulogy. Internment will be at Pine Hurst Cemetery in De Leon Springs, Florida after the service.

Winona Improta Went to be with her Lord and Savior on Saturday January 21, 2017. Winona was a woman of great personal conviction with a loving family. She married the man of her dreams, had a son that she loved dearly and took great pride... View Obituary & Service Information

The family of Mrs. Winona Improta created this Life Tributes page to make it easy to share your memories.

Winona Improta Went to be with her Lord and Savior on Saturday...

Send flowers to the Improta family.